What is the best padel racket for tennis elbow, as well as strategies to prevent and treat tennis elbow in padel, will be discussed in this article. Tennis elbow is the most frequent padel injury, resulting in pain around the elbow. When you’re continually hitting a forehand, for example, this might lead to overuse of the muscles in your arm. Poor technique is another possible explanation, which may come as a shock to you.

There are many people who suffer from tennis elbow (lateral epicondylitis), a typical problem for those who play padel tennis. Painful and discouraging, it’s a condition that can ruin a game. As a result, your padel career may be at an end altogether. Tennis elbow can be prevented with the following advice and tricks.As the popularity of padel tennis grows, so does the number of people who are affected by tennis elbow.

Tennis elbow is a condition in which the nerves between the elbow and the hand become irritated, resulting in severe pain. Lateral epicondylitis is the medical term for the condition. A sharp pain in your elbow following a game of tennis or padel is known as “tennis elbow.” In many cases, the discomfort is more severe and lasts longer than the normal soreness experienced by athletes’ muscles after a game. During a match, symptoms of tennis elbow tend to worsen.

Tennis elbow is caused by a variety of factors.

Tennis elbow is caused by a variety of factors. Repeated strain on the hand’s muscles and tendons is the most common cause of tennis elbow. Tennis elbow occurs as a result of the tendons being overstretched from doing the same thing over and over again, especially if the activity involves a lot of wrist rotation. Tendons, muscles, and ligaments are the primary components of this illness.

Your padel racket should be changed

Your racket is an important piece of the puzzle in preventing injury. Racket-handling injuries can occur with any strain, although some are more dangerous than others for the elbow.

When it comes to rackets, diamond-shaped rackets tend to be more top-heavy, increasing the risk of developing tennis elbow (Tendonitis).

Tennis elbow can be avoided by using the right padel racquet. Choose a racket that is easy to handle and has a round head shape. With a soft core, a racket is better at absorbing vibrations, making it easier to move.

Increase the diameter of the padel racket grip

Your elbow and overall performance can suffer if you use the wrong grip size when playing padel.

Gripping strength is more important to keep the racket from twisting in your hand than it is when using a too-small grip when playing tennis. Gripping too hard on the racquet might create tennis elbow and other arm problems.

Overgrips can be used to increase the size of a grip if it is too tiny. They come in two thicknesses: thick and thin. Make sure your grasp isn’t overly large, as this can lead to elbow difficulties. 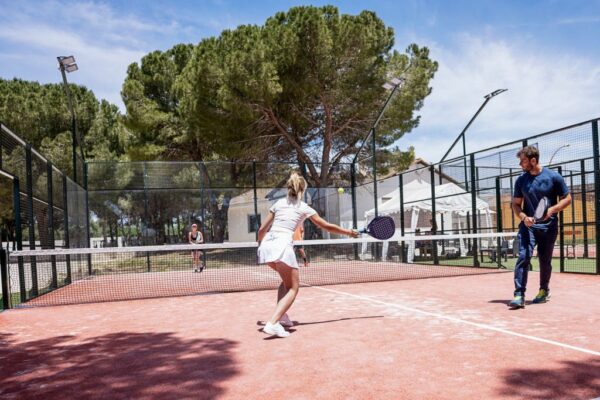 Work on your Padel Tennis technique

To avoid injury, it is critical to identify and modify improper swing techniques.

Hiring a padel tennis instructor is the best way to ensure you’re doing things correctly. Tennis elbow can result from overusing muscles in the wrong way, therefore it’s crucial to keep this in mind. Your risk of injury increases as your technique deteriorates. Playing with good technique will allow you to play for a longer period of time since the tiny muscles and tendons will not be as fatigued. Because you’ll be having more fun, you’ll feel tired less quickly.

Get your body and mind ready

Preventing injury to your muscles and tendons by warming up your arm, elbow, and wrist before a game is a good idea. You should warm up your muscles before participating in a game or taking a class. For 2-3 minutes, squeeze and release a tennis ball in each hand tightly. Tennis elbow can be prevented greatly by performing these stretches correctly and on a regular basis, despite their seeming insignificance.

Your forearm muscles are vulnerable to damage if you don’t use them on a regular basis. Muscles need regular exercise to maintain their health and resilience in the face of stress.

For players of padel, it’s especially important to focus on maintaining active without putting undue stress on their elbows. Exercises like brisk walking, jogging, and running, as well as weight training, can help you stay fit off the court without risking injury.

Push-ups, chin-ups, and dumbbell wrist curls should all be avoided if you have elbow difficulties, as they might strain your elbows. Consider taking a break if you experience discomfort during a workout.

Pause for a moment to recharge your batteries.

It’s difficult to stop doing something you enjoy when you’re addicted to it. You should consider taking a few days off if you get elbow pain during or after your games. You can lessen the likelihood of elbow problems that could necessitate a longer absence from playing by doing this.

Do something active, whether it’s going for a jog, running, or something else. Just watch out for overusing your elbow muscles. Tennis elbow can be avoided if you allow your body time to rest between matches.

Post-padel match recovery will benefit greatly from a soothing massage. Your muscles will initially be soothed as a result of this treatment. Muscles tense up as a result of the constant contractions that occur during a game. You’ll be sore the next day if you don’t do something to relieve your tension.

After a game, an ice bath or a cold shower is a great approach to help your body recuperate. To begin with, it may aid in the removal of lactic acid from the body. Second, your muscles suffer micro-tears as a result of strenuous exercise, resulting in soreness. Micro-tears in the muscles are thought to mend more quickly when they are submerged in ice water.

After a padel match, hydration and nutrition are two of the most overlooked recovery strategies. It’s impossible to heal if you don’t eat and drink enough. You’ll need to refill your energy levels with the correct foods and beverages after your match because you’ve burned a lot of calories.

Think about trying out the Tennis Elbow Strap as an alternative to the regular wrist strap. For people who suffer from elbow pain, a tennis elbow brace or tennis elbow strap is a go-to treatment and recuperation tool. Many different designs of forearm braces for tennis elbow are available, all of which fit snugly around the forearm immediately below the elbow. In other cases, there are additional pressure pads that are meant to sit on the muscle slightly below the area of pain.

Forearm braces for tennis elbow absorb the forces conveyed to the location of pain in the elbow by compressing the upper forearm. Many times they alter the angle at which tendons work in order to redistribute the forces exerted on the tendon attachment, which aids the healing process.

Tennis elbow straps are inexpensive, easy to put on, and you can adjust the level of compression to suit your demands.

Make an effort to lessen vibrations and impact

Tennis elbow, commonly known as lateral epicondylitis, can be caused by a number of factors, including vibrations from the padel racket at ball contact. Tennis players know exactly what I’m talking about. Choose a racquet that feels well in your hands. Many tennis racquets are recommended by Tennisnerd for players with tennis elbow.

Vibration dampening technologies abound in the modern world. Hesacore has a honeycomb-shaped grip that allows for increased hand-to-fist contact. As a result of its concave surfaces, the fingers can relax and thereby reduce the risk of injury and tension.

Specifically for padel, the Noene® Under-grip was developed. Fernando “Bela” Belasteguin, the best padel player of all time, collaborated on and ensured the product’s quality. As a replacement for the base wrap, Noenevibration-absorbing ®’s material absorbs as much as 98 percent of the incoming vibration.

Anti-vibration technology for padel rackets, ShockOut, lets you adjust the balance and improve your playing experience. The manufacturer claims that the dampers can lower vibrations by as much as 60% when inserted into the racket’s holes.