I’ll never forget the first time I went my good friend Linda to the padel court Bristol. Of course she started with the first question i always get “so what is padel tennis?“, after we cover that topic as could, we got started. Linda was and very much still is actually a dedicated tennis player, and after our chat about padel tennis she  was eager to test her skills with a new sport. As we got onto the padel court(for her first time), I handed her a bright yellow padel ball to play with, and that’s when she quickly realised how different padel was from the tennis ball she was used to.

A fuzzy synthetic felt material is used to create the exterior layer of a padel ball, which is known as the nap. This layer is brilliant yellow in colour like the outer of the common tennis ball. It is possible to put a spin on a padel ball due to the fuzzy texture of the ball, which also causes the ball to curve while it is in the air and to grip the court as it bounces, again almost like a tennis ball.

The fuzzy, bright yellow exterior of a padel ball serves a purpose far greater than it does to contribute to the ball’s aesthetic appeal.

Padel, a Game That You Can Put Your Own Special Twist On

After you have demonstrated a consistent ability to impart spin into the ball and send it back into the opposing court, you will be ready to begin incorporating spin into your return padel tennis strokes. At this point, you will have gained an appreciation for the nap of the ball, also known as its fuzzy outer covering.

In a similar fashion, if you play the ball off the back wall, the angled collision of the ball with the wall will cause spin to be imparted onto the ball.

Bringing the Ball to a Stop

The fuzzy covering on the ball generates friction between the ball and the air, which may not appear to be the case when you are running across the padel court chasing the ball. However, this friction causes the ball to move more slowly. This has the effect of reducing the speed at which the ball travels across the court as it is being played.

In the same way, having barnacles on the hull of a ship will increase the amount of drag, which will cause the ship’s speed to decrease.

When I stop and think about it, I realise that this makes a great deal of sense. When I play padel near the net, the ball comes into contact with my paddle at a considerably higher velocity than when I stand closer to the back wall. 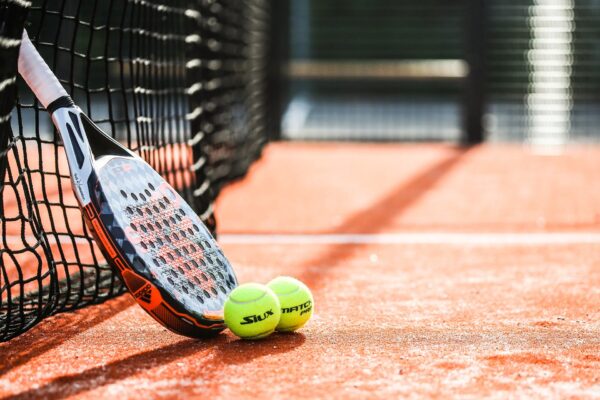 When you hit a padel ball with spin, the ball will curve as it travels through the air as a result of the impact. This holds true for the process of curving the ball in both the horizontal and vertical dimensions simultaneously. If you hit the ball with topspin, it will curve downward. The ball will not so much curve up into the air when it is struck with a slice as it will look to float a bit as it goes further before beginning to drop down to the court.

In the field of physics, this phenomenon is referred to as the Magnus effect. It was named after Heinrich Gustav Magnus, the physicist who conducted the initial research into the phenomenon.

Altering the direction in which the ball bounces

As soon as a padel ball bounces on a padel court, you will perceive the impacts of the fuzziness of the ball the most vividly.

AstroTurf is typically used as the playing surface on a padel court. This refers to a surface made of rough synthetic material that has excellent gripping power on the fuzzy outside of a padel ball.

If you are able to smash the ball with even a moderate amount of spin, you can anticipate that the padel ball will have a fairly significant shift in direction when it bounces. This is because padel balls are made of a softer material than tennis balls. This may cause your opponent to lose their footing and become caught off guard.

I believe I played a backhand crosscourt ball during one of the games I participated in over the last week, and I recall that it rebounded approximately six inches from the sidewall. My opponent prepared herself to play the ball as it bounced back at her from the sidewall, as it typically does. My opponent positioned herself ready to play the ball. However, because of the spin, it altered direction from the bounce and went in a path parallel to the sidewall. This caused it to go past the end of her extended padel bat.

Utilization of Materials that Have Been Recycled

This is without a doubt one of the coolest features that the fuzzy exterior layer of padel balls possesses. The majority of padel ball manufacturers construct the fuzzy outer layer using solely recycled PET plastic bottle material. The outer covering of every single ball that is used in the competitions that are part of the World Padel Tour is, without a doubt, crafted from recycled plastic.

Is Padel Tennis About To Become Big In The UK?

Head over to another of our blogs – Is Padel Tennis About To Become Big In The UK? to find out

Not All Things That Are Fuzzy Are Created Equal

This particular piece of information has taken me completely by surprise. To tell you the truth, from a physical point of view, it does make perfect sense.

Padel balls have a fuzzy outer layer so that they can be slowed down as they travel through the air. This is one of the purposes of the layer. Padel balls created for usage at altitude are covered with a layer of fuzzy material that is more densely packed than the layer used to cover padel balls designed for use at sea level. This is done in an effort to compensate for the reduced air pressure that is experienced at higher elevations.