There was a particular shot in padel that I struggled with when I was a new padel tennis player. Soared lobs that bounced towards the back glass and went high off the glass were common tactics my opponent used against me.

When you watch the pros play, it appears as if an attack just appears out of nowhere. After hearing the commentator mention the word “Bajada,” I decided to do some research on this amazing-looking shot.

The word bajada means descent or drops, and in this racket sport, it refers to the hard, attacking shot that is played from high against the back glass and travels downward over the net, aiming to bounce in line with the feet of your opponents. The low, fast-moving ball will be difficult for your opponents to control.

Learn how to do a bajada shot so you can smash your opponent in your next game! Keep on reading.

Bajadas in padel are shots played from close to the back glass after the ball has hit the glass. In most cases, bajadas are played above the head, like a serve in tennis. It is also possible to play a bajada from the top of your head, but you need to contact the ball with a relatively straight arm to get enough racket head speed.

As your bajada is thrown, it will fall and bounce near the service line. On a padel court, this means that the ball will bounce close to where your opponent’s feet are.

There are two ways for your opponents to try and stop the ball before it bounces or to get ready for a fast-moving rebound off the back glass. This drop shot or bajada is one way to do both of these things.

Learn The Bajada To Add It On Your Next Game Plan

The bajada is one of the few ways you can attack if your opponents play a good lob over your head that forces you to move back to the back of the court.

Playing padel is a good strategic move to make on the court at the net because you can see everything. So, your opponents will try to lob more often to get you away from the net.

You need to learn how to play the bajada because you will have to deal with lobs during a game of padel. Your success in winning the match could multiply with this technique.

Using Your More Dominant Shot When Learning The Bajada In Padel

You can play the bajada using both forehand and backhand, but it’s better to use your more dominant shot when you start learning how to play this attack technique. It would help if you played the game with both power and control to get the ball down fast enough to clear the net.

Play The Bajada From Behind The Ball And Use Forward Momentum

If you can be behind the ball at the instant of contact, you will be able to hit a hard, offensive bajada. This allows you to hit the ball somewhat ahead of you, with your weight over your front foot.

When you use this powerful stance when playing your bajada, your body will have forward momentum during the follow-through after the shot.

You can use this forward momentum to take a few steps after the shot to get back into position if your opponents can immediately block the ball back.

Let me begin by distinguishing between an open-angle and a closed-angle.

When playing a forehand shot, you should stand side-on with your non-dominant shoulder pointed in the direction you want to smash the ball. When the ball gets behind the line where your shoulder is pointing, slightly behind you, you’re playing a closed-angle. An open angle exists ahead of that line.

So, when learning to play the bajada, start with the open-angle or straight down the centre.

This means that if you are right-handed and play from the left side of the court, your best alternatives for a lower-risk bajada are to play down the middle or cross-court to the right. Playing down the left side will be more difficult and thus riskier.

If, on the other hand, you are right-handed and play from the right side of the court, your best choice is to play your bajada down the centre or the line on the right. This time, the cross-court shot to the left will have a closed-angle and riskier.

For left-handed players, you will reverse everything.

In both cases, playing down the centre is the most common option and the one you’ll see the most of in tournaments because it’s the least risky. 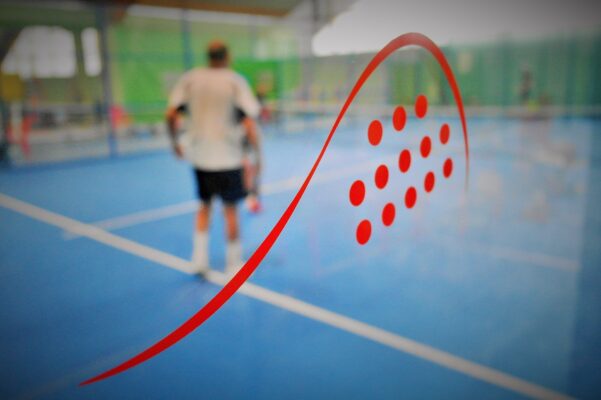 Padel Tactic: Use The Bajada To Lure Your Opponents Forward

When defending against a bajada, the best approach is to play the ball on the volley and block it back from as close to the net as possible. When you start using the bajada daily, there is a creative method you may utilize to help you gain more points.

As you play more bajadas, you will see that your opponents rush forward to get close to the net even before you hit the ball. This opens up a huge space behind your opponents that you may exploit with a well-placed lob.

Your opponents’ momentum is forward since they are rushing at the net. This makes it more difficult for them to return in time to deal with your lob effectively. It also allows you to reclaim your net position.

Padel Communication: Listen To Your Partner While Preparing Your Bajada

To get the most out of your bajada, you and your partner must communicate clearly.

Your complete attention will be on the ball as you prepare to play your bajada, as it should be. This is where your padel partner’s communication becomes crucial. Your partner should be able to tell you where your opponents are on the court. Is one of them staying back, or is one of them dashing to the net? Which one, if just one, is rushing in?

Knowing how your opponents are moving on the court behind your back allows you to prepare where you will hit your drop shot in order to take advantage of any gaps your opponents may have left available.

Now that you understand how to play a bajada, you can practice and execute the shot to get more points.